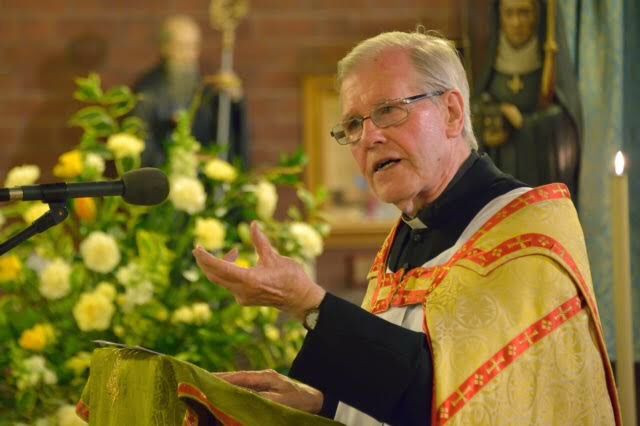 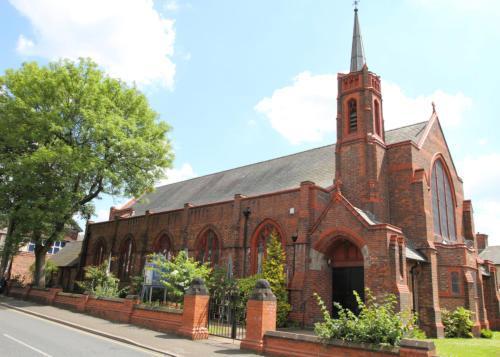 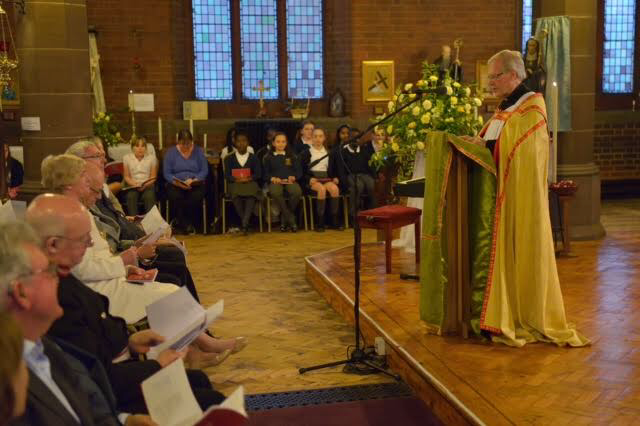 Within school we have a daily act of Collective Worship This usually takes place in our school hall but on a Tuesday morning at 9:05am Father Croft leads our school service in church, which everyone is welcome to attend.

Parents and carers are also invited to join us on a Friday morning during our 'Well done' worship. We use this time to acknowledge the achievements of our children and present two awards - Star of the Week & The Headteacher's Award.

The Headteacher's Award is given to pupils whow show any of our Christian values in action.

The 15 values that we live by are:

The Story of St Hilda 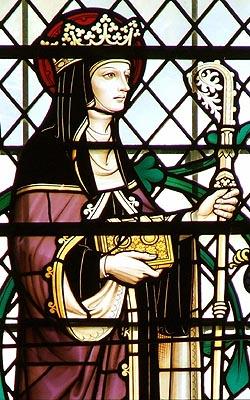 St Hilda is generally represented with a pastoral staff and carrying an abbey church. Often, there are ammonites at her feet. Legend tells of a plague of snakes which St. Hilda turned to stone supposedly explaining the presence of ammonite fossils on the shore at Whitby.

Hilda was born in 614 and was a princess of the Deiran family.  She led a quiet life until at the age of thirty-three when she decided that she loved God so much that she became a nun.  She had planned to leave England to enter a convent in France where her sister was already a nun, to live an exile for our Lord’s sake so that she might then more easily pray for all people. But Hilda was persuaded to join an English convent near her home in Northumbria. Very soon she was chosen to become abbess of the nearby double-monastery of Hartlepool, a religious community of monks and nuns living separately in adjoining convents. Later, she served as abbess of another double monastery that eventually became known as Whitby.

Hilda was a passionate student of scripture and her goodness and wisdom became known outside the monastery as a woman of great energy, who was a skilled manager and teacher, inspiring many to turn away from sin and wrongdoing.  Towards the end of her life, she suffered from a lasting illness and a continuous high fever but in spite of her pain she focused on offering thanksgiving to God until her death.

St Hilda is the Patron Saint of our church and school and we especially pray for her on November 17 each year. 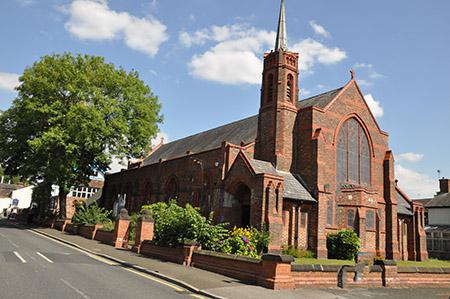 Why not have a look at all the exciting events taking place at Church.

Dedication of the Croft

The idea of having a hall arose four years ago, but its design and certainly its position has radically changed since then. Originally, the hall was to be constructed on the land outside of the west end
of the church, but after long and helpful consultation with our neighbours, this scheme was removed.

Two years ago an idea emerged that the hall could be built on the land to the south of the church, which appeared narrow and difficult, but a scheme was developed that would require the demolition of the existing vestry, to allow for a new kitchen. The then named ‘community room’ would be reconfigured to accommodate the new vestry, toilets and the previously named ‘paper shed’, a brick building used to house tables, chairs and other sundry items, would be incorporated into the new hall.

Again we consulted our neighbours who were not only supportive but added value to the scheme and shared their ideas. It was this scheme that was proposed to the Diocesan Advisory Committee and subsequently to the Planning Department at Bury Council; both declared their full support.

Following a robust Tender process we appointed Saber Construction Ltd as the preferred Builders of
the new hall. The help and advice we received from this company has been wonderful and the only draw back we experienced was the British weather which delayed the building for several weeks.

Every two years the children in our school go to Church to join in with the Easter experience. Parents and carers are also encouraged to participate in a variety of activities that work through the 'Stations of the Cross.' It is a fun way to explore some of the important events that led to the death and resurrection of Christ.

Unfortunately not the ones with chocolate chips.

Some cookies are necessary in order to make this website function correctly. These are set by default and whilst you can block or delete them by changing your browser settings, some functionality such as being able to log in to the website will not work if you do this. The necessary cookies set on this website are as follows:

Cookies that are not necessary to make the website work, but which enable additional functionality, can also be set. By default these cookies are disabled, but you can choose to enable them below: